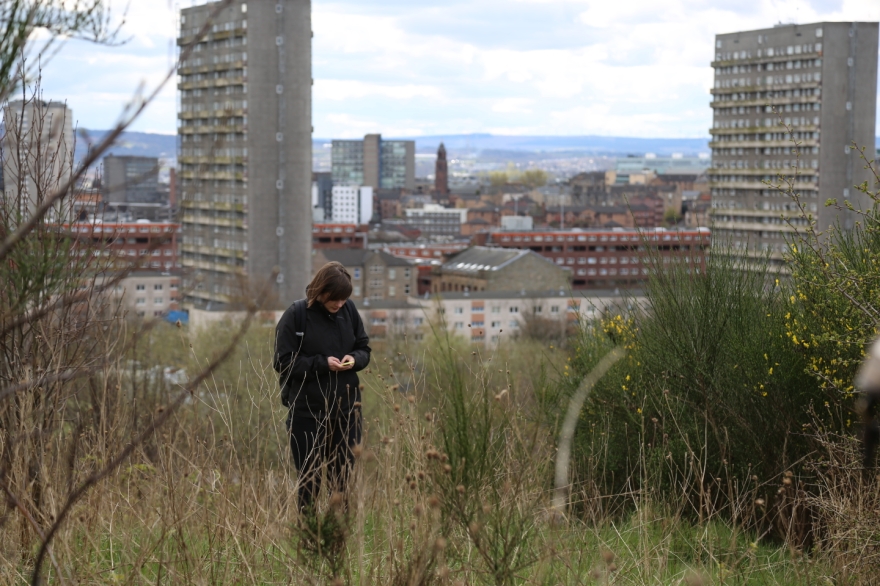 I think it’s fair to say that North Glasgow doesn’t figure high on the itinerary of most tourists visiting Glasgow, and for those of us living elsewhere in the city, it perhaps isn’t a regular destination. Despite living in Maryhill when I first moved to Glasgow, and having used the canal as a regular running route for the last 10 years or so, I’d rarely ventured to its northern side – so I was keen to explore. Billed as “a walking tour of hidden spaces in North Glasgow, exploring the city’s history and heritage, questions of dereliction, the benefits of wild spaces, and the potential for community transformation of urban land”, this Soil City walking tour led by Clem Sandison, provided the perfect opportunity to investigate.

A group of twenty or so budding urban explorers gathered at the Whisky Bond for a brief introduction, before the short walk along the canal to our first destination of the Hamiltonhilll Claypits. Shiona MacPhail, of the Friends of Possilpark was our expert guide around this captivating urban wilderness. A former industrial site which was vital to the expansion of the canal system – a history of clay extraction, shale-oil extraction, boat repair and iron making have all left their traces on the site, whether it be in the soil, or surface traces of former infrastructure. Left to nature since the demise of these industries, the claypits are now a bustling greenspace of great biodiversity. It was really enjoyable to have a root around and take in the quiet ambience of the place, with that compelling juxtaposition between natural and human-made things that you find in such places – finds ranged from abandoned cans of Tennent’s Super Lager to the bones of roe deer! The hopes of Shiona and the Friends of Possilpark are for the rich biodiversity and industrial heritage of the claypits to become a real asset to the local community, by raising public awareness and improving access to the site. 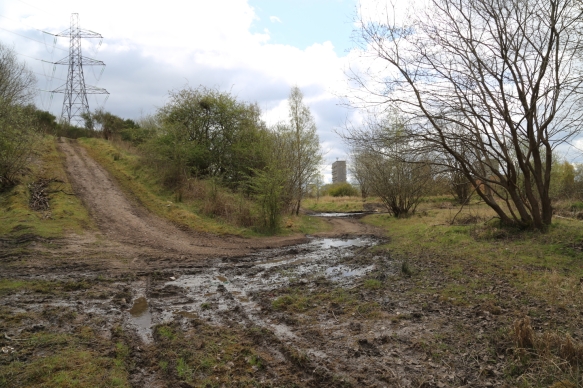 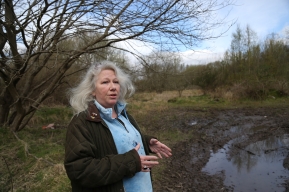 Next stop on the tour was up the back of the claypits to the Hamiltonhill Allotments. This involved walking up the shale bing left over from its industrial heyday, which provides a fantastic 180 degree view looking South over the city. I even spotted a couple of roe deer amongst the silver birches below, before they turned their cotton wool tails and fled. For me the hidden gem of the claypits are a proper edgeland, what Farley and Roberts describe as – “a wilderness that is much closer than you think: a debatable zone, neither the city nor the countryside, but a place in-between”. 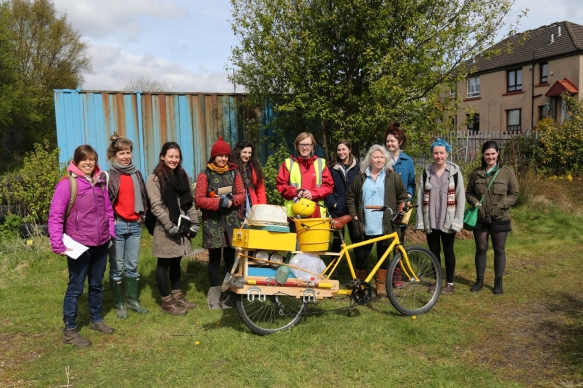 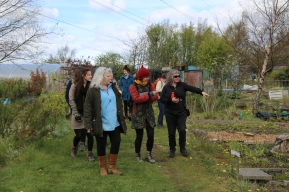 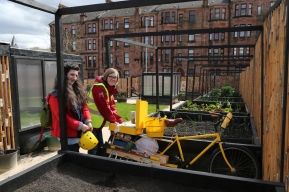 At the allotments we were met by one of the Soil City roving research bikes and a couple of pre-dug pits to have a closer look at the soil and some worm identification. We also had a chat with one of the allotment holders who showed us around and talked about her relationship to the allotment and the community that surrounds it. The more orderly and organised layout of the allotments provided an interesting contrast to the wilder nature of the claypits. Continuing the theme of community growing, we took a short walk into Possilpark to have lunch in the lovely space of the Back Garden – a community growing space located on formerly derelict land, which has individual, communal and group plots, as well as drop-in social gardening sessions. A great example of how stalled spaces can be co-opted for the benefit of local communities. 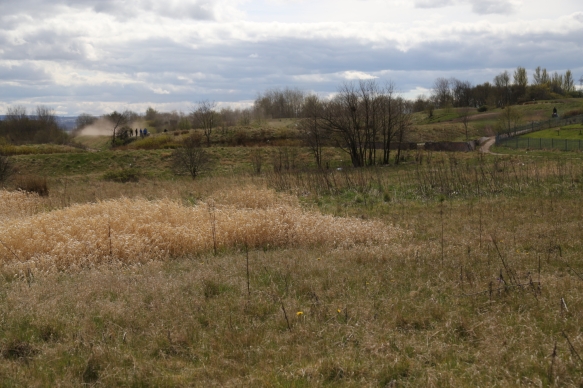 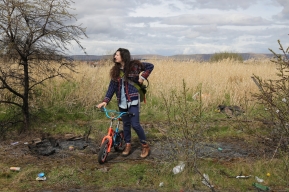 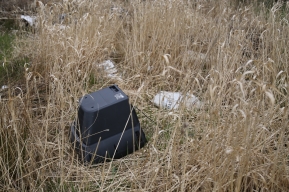 Our final stop on the walking tour was nearby Cowlairs Park, a large area of open parkland (formerly several football pitches) which after being effectively abandoned by the council has become somewhat of a dumping ground, and garnered a reputation as a bit of a ‘no go area’ due to drinking and anti-social behaviour. With the absence of any strict regulation the park has been re-purposed for an altogether different use – its open layout and the differing elevations of its former football pitches now provide the perfect race track for motorbike enthusiasts. This was evidenced on the day, as a large number of quad bikes and dirt bikes tore around the place, zooming by at great speed. Added to the rubbish, random discarded objects lying around and scorched areas of grass, the park had a pretty post-apocalyptic, Mad Max feel to it. Despite this, it was a compelling place to be, with great views towards the north of the city and a weird beauty. Although its far from the manicured care of other city parks such as Kelvingrove or Glasgow Green, perhaps places like this are needed, where people are able to get away from the regulated and monitored spaces of the city to find excitement and release some energy by driving motorbikes at high speed? Better here than on the roads! Clem described Cowlairs Park as a “feral commons”, which I think describes its sense of place perfectly.

The short walk back to the Whisky Bond completed our circuit of some of north Glasgow’s hidden spaces, while we chatted and reflected on the places we’d visited. Although they may lie outside the area covered by most of Glasgow’s tourist maps, the various edgelands of north Glasgow are a captivating place for anyone interested in the rich industrial heritage of the city, as well as the opportunities that derelict spaces present for both wild nature and community action. 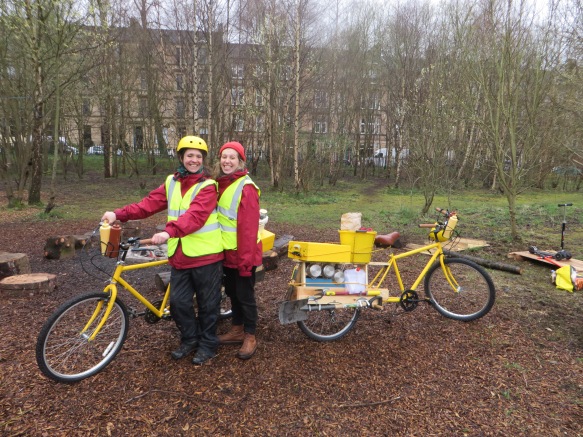 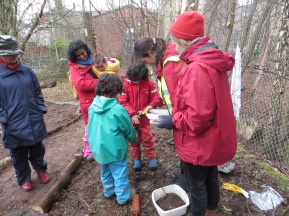 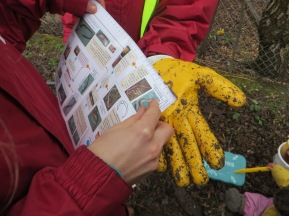 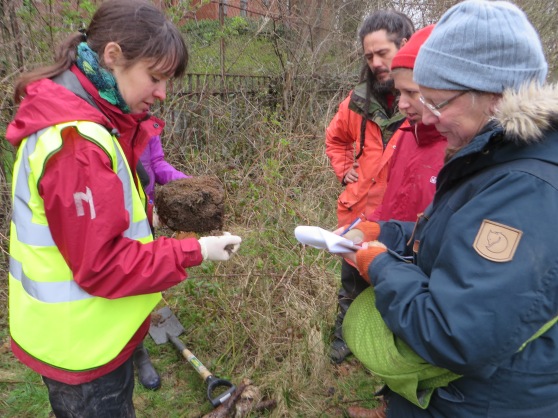 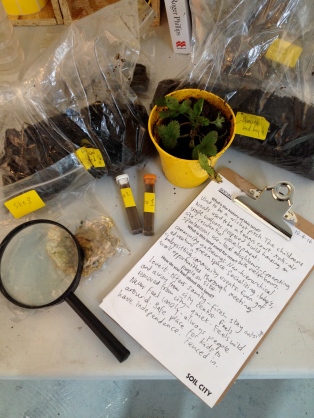 The bright yellow bikes of the Soil City roving research team brightened up a rather dreich day at North Kelvin Meadow yesterday. Despite the weather, spirits were high and a selection of soil samples were gathered from the site, as well as some worm surveying and recording of tree, plant and bird life. The old red blaes surface upon which the meadow has grown proved to be a recurring theme across the soil samples – a reminder of its previous use as a football pitch and of how quickly nature can flourish if given a chance. It was great to hear the thoughts and feelings of local residents towards the meadow, with a strong sense of community attachment coming to the fore and an appreciation of the meadow as a valuable place in which to play with, experience and learn about nature. 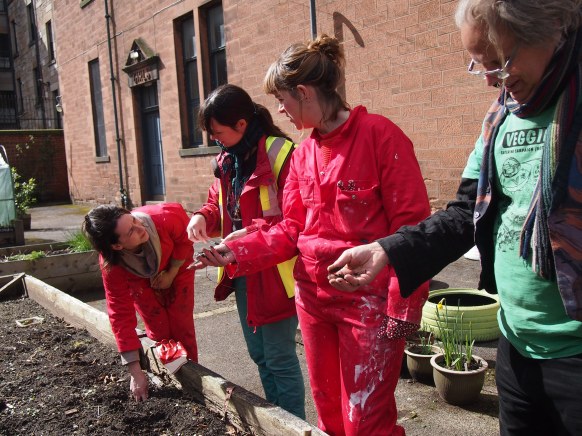 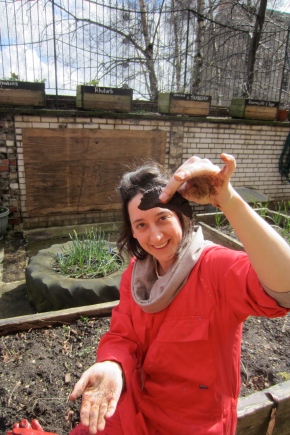 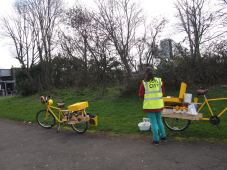 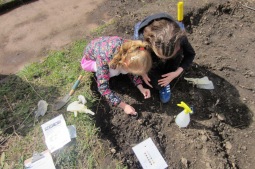 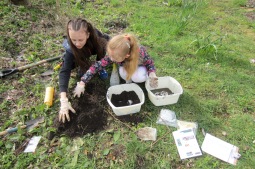 Saturday was our first day out on the bikes. We had a welcome reception at the Kinning Park Complex community garden and Moogety Garden, a community garden in Govan. We also dropped by Plantation Park on the way and were surprised by the biodiversity of the site event though it is right next to a busy motorway.

People wanted to know more about their soil and what that meant in terms of growing produce. They were up for getting to know their soil better and sharing their passion for these small patches of land they had invested in.